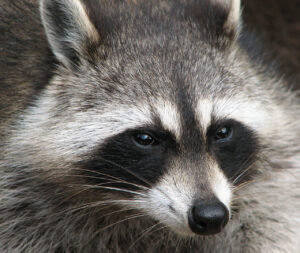 Raccoons are habitat generalists, meaning they inhabit a range of ecosystems, including the wetlands of the Florida Everglades.

Raccoons are found throughout North America with the exception of some desert areas in the southwest. They are also found in much of South America, and in the 20th century were introduced into parts of Europe and Asia. Raccoons are habitat generalists, meaning they inhabit a range of ecosystems, including the wetlands of the Florida Everglades. They are commonly spotted wading through the shallow marshes of the Everglades, and are typically not far from a water source.

Raccoons are about the size of large house cat or small dog, and are overall gray in color. They have rounded ears, and a relatively long, black and white ringed tail. They are also well known for the black “mask” on the face. They have thin legs and highly dexterous front paws. Their rear legs are longer than the front legs, giving them a hunched appearance. Raccoons usually weight around 8-15 pounds and are about 24-38 inches in total length from head to tail. Males are usually a little larger than females.

Raccoons are opportunistic omnivores that will eat just about anything they come across. This includes animal material such as amphibians, eggs, crustaceans, and other invertebrates. They will also eat a variety of plant matter, such as fruit, nuts, seeds, and berries. They are also well known for eating pet food left outdoors and rummaging for scraps in garbage.

Raccoons are very curious and intelligent animals. They may be observed individually or in small groups, often exploring and interacting with their environment. They are well-known to manipulate locks, doorknobs, and latches to access food. Raccoons are nocturnal and sometimes crepuscular, although it’s not particularly uncommon to spot them during the daytime in less disturbed or non-urban areas. It is, however, atypical to see raccoons heavily active during the day in urban environments, and people should remain wary of individuals exhibiting strange behavior such as pacing or hanging around busy parking lots or roads during the daytime; this could be a sign of a diseased animal.

Feeding raccoons alters their behavior and is not encouraged. These individuals are more likely to approach humans whether they’ve been enticed or not, which can lead to unwanted interactions. Raccoons have sharp claws and teeth, and more human interaction increases the chances of bites or scratches. Raccoons are also vectors for diseases such as rabies, and any human contact should be avoided, as rabid animals may not show obvious symptoms of infection for several weeks/months after becoming infected. For more information on living with raccoons, please visit: https://myfwc.com/media/1666/livingwithraccoons.pdf

Female raccoons may become reproductively active as early as one year old. Mating season usually occurs in late winter through the spring (Jan.-Jun.). After a 65-day gestation period, females typically give birth to 2-5 kits during the spring months. She will contribute all of the parental care, and will keep her kits in a constructed den for around 10 weeks, although kits will accompany their mother up to 13-14 months of age.