The Big Cypress region of southwest Florida is a diverse mosaic of different habitat types with a unique blend of temperate and tropical species. Major natural controlling factors are, the hydrology and geology of the low-lying land surface, fire in a subtropical environment, along with a strong wet-dry season. The wet season brings consistent rains which flood the landscape, the wet season also means hurricanes, which can bring heavy late summer rains. In general, the Big Cypress contains 5 major freshwater habitat types; these include 1- Hardwood hammocks, 2 – Pine flatwoods, 3-Prairies, 4 – Cypress swamps, and 5 – Hardwood swamps. We numerically ordered the habitat types 1 to 5 to match their topographical elevation and hydroperiod length (how long a habitat holds water). Hardwood hammocks are the highest and driest, whereas Hardwood swamps are the wettest and lowest. Additionally, most of these habitat types can be classified even further into more specific sub-habitats. For example, a Cypress swamp is one major habitat type, however they can be separated in to three different sub-habitats: forest, dome, or strand. Hardwood hammocks can be split into two sub-habitats, temperate and tropical depending on the species composition of the hammock.

As you travel farther south into the Big Cypress ecosystem, clean water flows through wetlands, across the Greater Everglades ecosystem, into Everglades National Park, and empties in the vital estuaries along Florida’s southwest coast and the Ten Thousand Islands.

Hardwood hammocks are dense forests found on slightly elevated bedrock areas that have the highest topographical elevation of any habitat type in the Big Cypress. Hardwood hammocks resemble a tropical forest due to the rich diversity of epiphytes, lichens and vines that grow in their shaded interiors. Hammocks are considered forests since they have canopy coverage greater than 50%. Although hammocks are one habitat type the plant and tree composition can differ between tropical and temperate. Therefore, the majority percentage of tropical or temperate species determines how we label these environments.

Hammocks have the shortest hydroperiod of the 5 habitat types of about 10-40 days a year. The trees and shrubs of hammocks provide food and shelter for a wide variety of species in the Big Cypress including the Florida panther and Florida black bear.

The understory of these pinelands may be made up mostly of saw palmetto (Serenoa repens) and other dense shrubs, or a mosaic of mixed grasses and seasonal wildflowers. The vertical mosaic in these pinelands us dominated by the slash pine (Pinus elliottii) and is considered a “woodland” which means10-49% of the canopy coverage is from trees. The Pinelands found in the Big Cypress National Preserve have a hydroperiod of about 20-60 days a year. In big cypress the Florida slash pine (subspecies) is the dominant overstory species.

The Florida slash pine has evolved to survive the summer floods and spring droughts as well as the fires that are a natural part of the Big Cypress ecosystem. Florida Slash pines have longer needles, smaller cones, denser wood, and a longer and thicker taproot compared to the northern slash pines. They are shorter than their northern cousins, attaining a maximum height of about 56 feet. These adaptations allow the Florida slash pine to better handle the seasonal extremes of drought and flooding as well as survive the stresses of tropical storms and hurricanes. 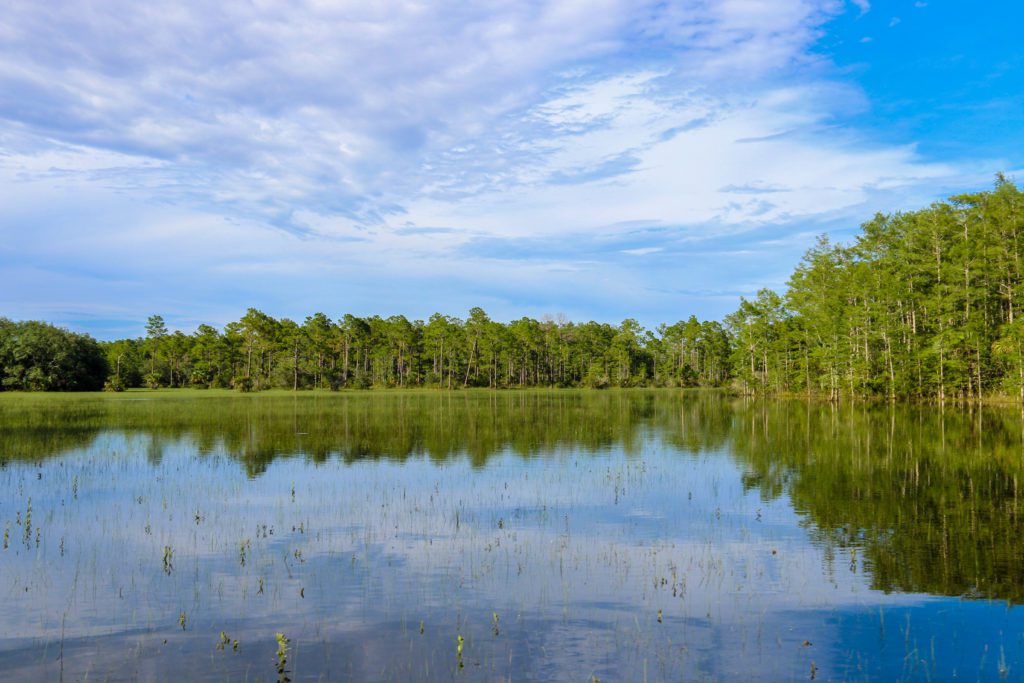 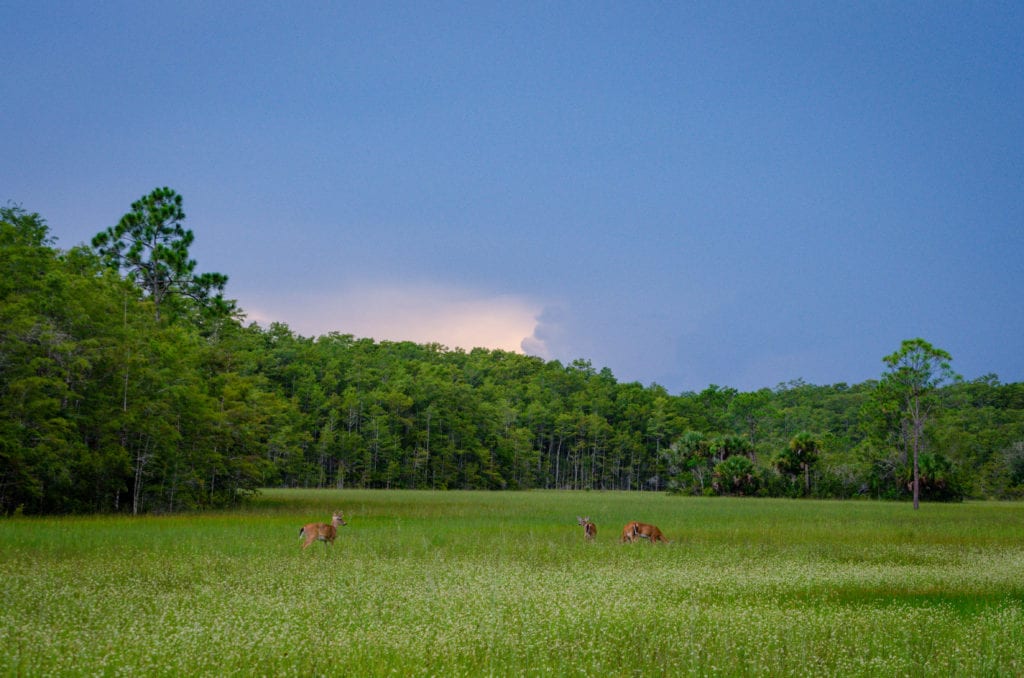 Prairies are classified as wet or dry based on the dominant plant species within them, than the presence or absence of water. A wet prairie is a prairie characterized by water loving plant species such as sedges and water loving grasses. Dry prairies are typically characterized by saw palmetto and grasses that don’t have a particular affinity for standing water. Wet prairies have an hydroperiod ranging from 50-150 days per year, and rarely flood deeper than 20 cm.

A cypress forest is a stand of Cypress trees are communities that are dominated by pond and bald cypress trees. The normal Cypress swamp hydroperiod is 200 to 300 days, water is deepest and remains the longest near in center where the trees are biggest. Over 1/3 or roughly 33% of the Big Cypress ecosystem is Cypress swamp.

Cypress forests also have canopy coverage percentage greater than 50%, larges stands of Cypress forest are clearly recognizable across the region, this is the dominate habitat type of the ecosystem.

In a cypress dome the tallest trees grow in deeper water and the smaller trees grow along the edge in the shallower water. On the perimeter of the domes and in sparsely populated areas of cypress, the water levels will drop quickly during the driest time of the year, however the ground will usually remain damp. Some cypress domes have a donut shape with an open hole in the center as the water is too deep in these sports for trees to grow. In these types of cypress domes water usually remains year-round, even during the driest of seasons, and is an important refuge for alligators and fish.

Cypress strands are elongated swamps that are linear sin shape and are dominated by cypress trees. Strands are generally much larger than domes, elevation in the strands is slightly lower than the surrounding areas and therefore function as flow ways of inland swamps. The flow of water through these strands is generally southwesterly as a small creek or slough.

Cypress domes and Strands have a long hydroperiod. The deeper areas stay wet throughout the year especially in the center of the domes and in the sloughs. On the edges of the strands and domes, and areas sparsely populated by cypress, water levels can drop considerably during the dry season, and surface water may disappear, but the ground will usually remain damp.

Pop-ash and/or pond-apple (Annona glabra) frequently occupy the ‘deepest water areas beyond the cypress forests. The longest hydroperiods are measured in pond-apple pop-ash hardwood swamps. The mean hydroperiod for Hardwood swamps ranges between 250 days to 350 days, with some hardwood swamps retaining water annually, aiding in native orchid and bromeliad growth. Willow invades post-fire-sites but seems to be found on slightly higher and drier sites than pond apple and pop ash. The pond apple pop ash swamps contain abundant bromeliads and epiphytic orchids, with only a few aquatic plants in the understory, such as alligator flag, this due to the immense shade and high-water depth. Willow is also found as dense, thick stands aid occurs sometimes in association with pond apple, pop ash, and the aforementioned Alligator flag.

Habitat Types of the Central and Southern Everglades Ecosystem

The sawgrass ridge and slough mosaic is perhaps the most “iconic” Everglade’s ecosystem, forming the vast “River of Grass.” These marshes are made up of sawgrass (Cladium jamaicense) covered ridges, more open sloughs with dominated by water lilies and other submerged aquatic plants, with a bottom made up of dense organic peat, colloquially called “muck”, which sits atop a hard bed of ancient coral reef. These expansive sawgrass marshes seemingly disappear over the horizon, it’s a river of grass as far as the eye can see. Water flow through the Everglades has been impeded as a result of human interference. Management of water flowing through the Everglades has been achieved through the construction of levees, canals, and other water control structures which has reduced and/or stopped the natural sheet-flow of the Everglades, with the central Everglades holding too much water and the southern Everglades including Everglades National Park and Florida bay receiving too little fresh water allowing for increased salinity in Florida bay and saltwater intrusion into the Everglades itself. 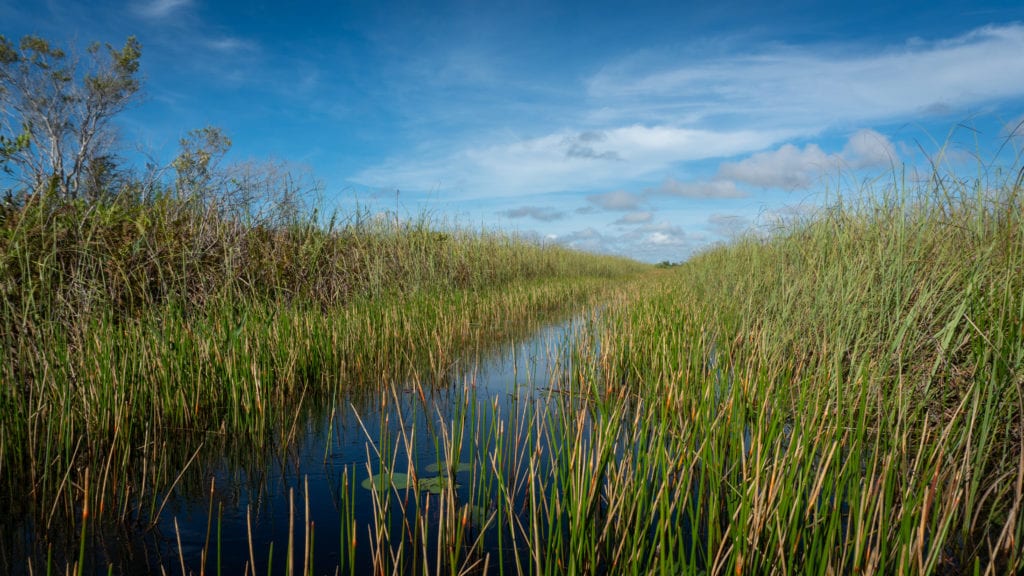 Tree islands are important centers of biodiversity in the Florida Everglades; they have two to three times the plant and animal diversity of the surrounding sawgrass wetlands. This high diversity is due primarily to their higher elevation relative to the adjacent wetlands. In the natural Everglades system, water levels fluctuated seasonally with rainfall, and tree islands were the only sites that escaped flooding during the wet season. These seasonally dry sites provided refugia and nesting sites for animals and allowed tree and shrub communities to flourish.

However, tree islands themselves are in danger, as is the wildlife that depends on them. The impounding of water in the central Everglades has altered the hydroperiod and hydro-pattern of certain areas towards characteristics of a lake rather than a seasonal wetland. This alteration in the seasonal flooding and drying of the system is harming the tree islands, as well as ridge and slough mosaic. Animal and plant abundance and dispersal has changed as a result of the change in how water flows, or in this case, doesn’t flow through the Everglades.